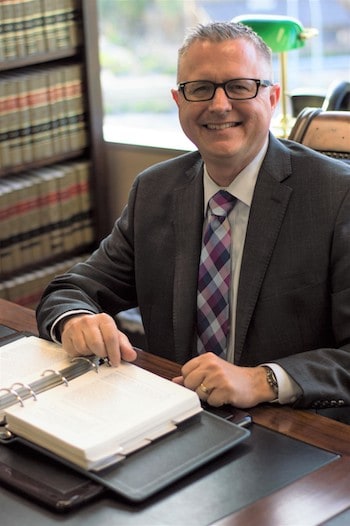 Trent R. Buckallew, Esq., was born in San Diego, California and raised in Tempe, Arizona. He attended Arizona State University, where he received his Bachelor’s Degree in Justice Studies (1996). Immediately thereafter, Mr. Buckallew attended California Western School of Law in San Diego, CA where he graduated and received his Juris Doctorate degree (1999). Upon graduation from law school and passing the Arizona bar exam, he accepted a position with the Mohave County Public Defender’s Office, and subsequently, the Maricopa County Public Defender’s Office, before entering into private practice. While serving with these public defense firms he gained invaluable trial experience, and an extensive knowledge of our often-complicated criminal justice system. Mr. Buckallew is a Board Certified Specialist in Criminal Law by the Arizona State Bar, and has extensive experience handling the defense of DUI and criminal cases. With nearly 20 years’ experience as a Criminal Defense Attorney, Mr. Buckallew has handled criminal cases ranging from simple misdemeanor cases to serious and complex felony jury trials. Mr. Buckallew has extensive experience resolving difficult criminal cases utilizing pre-trial negotiations, settlement conferences and, where appropriate, contested trials – including both bench trials and jury trials. As a solo practitioner, Mr. Buckallew continues to focus his scope of representation on DUI and criminal defense litigation. Maintaining a statewide practice, he can represent individuals in any court in the State of Arizona -- including City Courts, Municipal Courts, Justice Courts and Superior Courts.

Not only is Mr. Buckallew well versed in criminal law, having undertaken an academic concentration in criminal litigation during law school, he has also received his Master of Forensic Science (M.F.S.) degree in 2004 from National University. Having an attorney trained in both the law and the forensic sciences is critical given the growing importance of forensic science in criminal litigation. Whether it is a misdemeanor DUI, a simple drug offense, or a major homicide case, forensic science will likely play a significant role in your case. Having an attorney who understands the complexity of the science behind the evidence, including the potential weaknesses of the scientific evidence in your case can help ensure that you are properly represented and defended in court.

Professional Training
Professional Awards
E-Book Consumer Guides
Contact Us
Practice Areas
Client Reviews
★★★★★
We hired Trent Buckallew to represent our son following a second MIP ticket he received while in college. Mr. Buckallew kept us informed throughout all proceedings and helped us receive the satisfactory outcome of dropped charges in exchange for taking an alcohol awareness class. He was personable, knowledgeable and treated our small case with care and compassion. We would highly recommend him to anyone in need of representation. SR
★★★★★
Thank you so much for the time and effort you put into the case against (client's name). We sincerely appreciate the great job you did. We are praying this is the end of it. Thanks again so very much. This was such a difficult time for our family. LN
★★★★★
I'm finally 100% clear of the problem that started our relationship. I cannot thank you enough for handling my case and expungement. I have a great sense of new beginnings and don't have to let my past affect my future. My freedom is priceless. TM
★★★★★
I appreciate everything you were able to accomplish for my father and will certainly be referring Mr. Buckallew to anyone I know who may be in need of an excellent criminal defense attorney. CM
★★★★★
Trent handled cases for me on two different occasions involving tickets for seat belt violations in commercial vehicles. Very happy with results. All charges dismissed. One case in Flagstaff and one case in Gilbert Court. KF
View More
Submit a Law Firm Client Review